The best hat for land and sea!

While travelling through South America in 2009, Chris Cooke (founding director and former Broome pearl diver) unleashed his creativity and Ozbrero was born.

For centuries, the Inca people displayed a rather unique dress code, among other traditions. Also popular was an appropriate hat to protect from nature’s harsh elements. A hat that many then wore forever-and-a-day. A weathered representation of their hard-working lifestyle. The Mexican Sombrero style was a more common choice for its greater sun protective qualities. Given Australia’s climate is mostly sunny – it soon became apparent to Chris that having a durable, protective, hard-working hat for his land and sea lifestyle was paramount.

Hear his story below…

Having grown up on the waves at City Beach through to Trigg in Perth, then completing a plumbing apprenticeship before travelling around Australia, I was adopting a rather vigorous outdoor lifestyle from a young age. With one of my older brothers residing in Broome, I arrived in town over 26yrs ago now and worked as a plumber before getting involved in pearling with Paspaley. My love of the water has never strayed. It wasn’t until I’d worked more than 6000hrs underwater (both on the farms and drifting) that I realised I probably wanted to be on top of the water more than under it as I got older. So I moved to tourism expedition vessel True North Adventures as a fishing/tourism guide. These days, I’m operations/logistics based with occasional on-board deck duties. And I still keep my hand-in with the odd plumbing job, Broome wharf shift, or tug boat gig. So it’s still all water, dirt and outdoor based work, which means there’s a real place for stay-put, serious sun protection.

Following my travels to South America in 2009, I was eager to talk with my mates in Perth, who own commercial printing and headwear production companies, about an idea for a new style of legionnaire wide brim hat for men, women and kids alike. A cotton design that allows for the back flap and brim to act as one and fan-out around from the neck. I’m not keen on hats where a thin nylon or polyester flap sticks to the neck! It was also vital that the hat be made of tough, durable and eco-safe cotton that would suit basically every outdoor pursuit in Australia and represent a way-of-life. Given my lifestyle, I really got thinking about a proper tough hat to wear for work and play. And these days being a family man, I especially see the benefits of ultimate sun protection that’s washable, effortless and comfortable for the next generation as well.

Meeting my partner Fiona in 2012, she has also come from a lifestyle filled with outdoor activities. Born and raised in Esperance (where the ozone hole was extra big as a child), spending countless hours on beautiful beaches and playing sport. She’s also a tennis coach and avid traveller, which has meant she has spent a lot of time outside too. Plus, her Grandad was a champion tennis player in his day but residing in Kalgoorlie with a young family and working as a gold mine general manager made travelling to compete quite difficult. Training daily under the Goldfields sun, more often than not without a shirt on his back or hat on his head, he endured his fair share of sun related skin damage.

Ozbrero is an Australian owned and designed company (based in Broome, WA) that is enjoying continued growth across the continent with their ultimate sun protective, rugged, practical and durable wide brim cotton hat that is based on principles derived from the Sombrero, and is perfect for the active outdoor lifestyles of today. The cotton is certified Oeko-Tex Standard 100 (under global recognition guidelines) which means the cotton used is of the highest quality and free from over 100 harmful substances that can be found in many manufacturing outlets.

There’s no denying that the great Australian outdoor lifestyle demands respect. The wide brim cotton Ozbrero has been especially designed to protect the head, face, ears and neck from the sun. It travels extremely well and easily carries from work to play, whether that be on land or sea. An Ozbrero loves the water and dirt, just like us! A well-worn Ozbrero becomes a very comfortable essential for men, women and kids alike. And to put it simply, we’re helping keep our skin younger and healthier because of it.

Get out there crew! An Ozbrero may not be couture enough for the glossy fashion mags but it’s time to take your sun protection duties seriously. (#ruggedstyle for #landandsea) 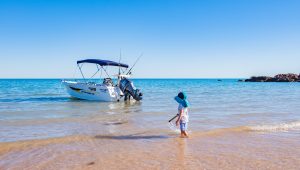